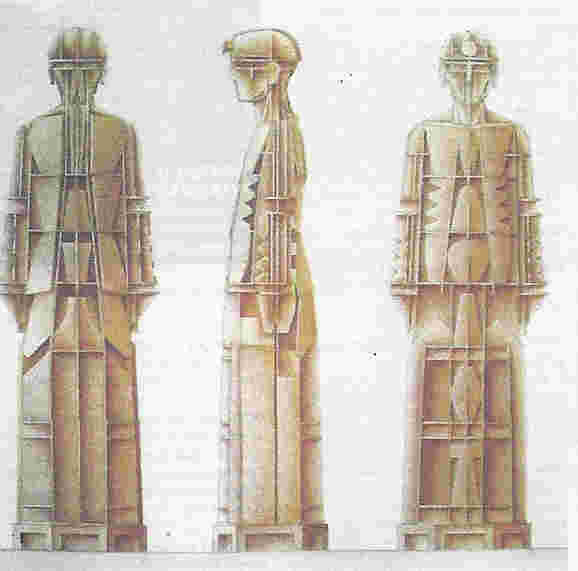 A Landmark sculpture of a miner is to strenghten the bond between the North East and Germany, as DAVID WHETSTONE reports

A link between North Tyneside and its German twin town has been made permanent and tangible thanks to sculptor John O'Rourke. His 6ft 7ins steel figure of a miner is to stand on a plinth marking the gateway to a new development in the former mining town of Oer-Erkenschwick.

The story goes back to 2010 when the industrial region of Germany was European Capital of Culture. Oer-Erkenschwick, as its contribution, invited each of its twin towns to come up with a new sculptur for the town. In North Tyneside, arts development manager Mike Cambell commissioned John, who lives in Whitley Bay, to be the borough's representative. "The brief was totally open and they were up for ideas," says John. "When I read about the town I found the mine closed in the early 1990s, and the town had been badly affectecd. Most of the homes were miners' houses, although quite large by North East standards. "Mining had financed the building of the town and when the pit closed there was a lot of unemployment. "The last few years have been a period of readjustment for them." With their shared heritage of mining and the pain of pit closures, the idea of a miner appealed to John and also to civic leaders in the German town. "Theiy said it struck a chord with everybody", says John, a member of the Royal British Society of Sculptors who has been creating ambitious and eye-catching works in the North East for a number of years. His model of the miner was exhibited in North Tyneside last October, and initially John thought the full-scale work would be fabricated in the North East. But the Germans were keen for it to be made there and, at the end of October, John and his partner Michelle went to Germany to see the sculpture being fabricated in the steel workshop of the last active mine in the area, the Auguste Victoria in the nearby town of Marl. The finished article is not quite the same as the model because, on seeing it, John decided to lenghten the body, thereby making it a little taller than planed. Plans for the siting of the sculpture itself have also moved forward, it seems. John Says: "When we went over there this time, I thought it was to be exhibited temporarily on site. It isn't. It's going to be a gateway feature for a new development in Oer-Erkenschwick. "It will be going in the architecturally built up main entrance to this area, which was once a huge pit heap but is now a very pleasant semi-rural environment towards to the edge of the town. "There are houses being built there and there's a huge building that's part of a mine which is going to be restored. One idea is that it could be a hotel." John says the other sculptures will be dotted around the development. "It's great" he says. "I couldn't have worked out better really." One thing disappointed him, though. He had wanted the sculpture to be made of corten steel, the same wheathered material used for The Angel of North which gives it a naturally rusted look. Instead the Germans used ordinary steel, but John is hoping the work will eventually mimic the flat grey colour of much of the industrial machinery to be seen in the area. The finished sculpture will be presented to Oer-Erkenschwick's burgermeister, Achim Menge, and then kept in storage until extensive building work in the regeneration area is complete. John, who teaches fine art at Tyne Metropolitan College, has exhibited work nationally and internationally. Inspired by the art and architecture of ancient Egypt, which he says has never been surpassed, John says he hopes the Germann sculpture will exude the same air of camness and serenity.